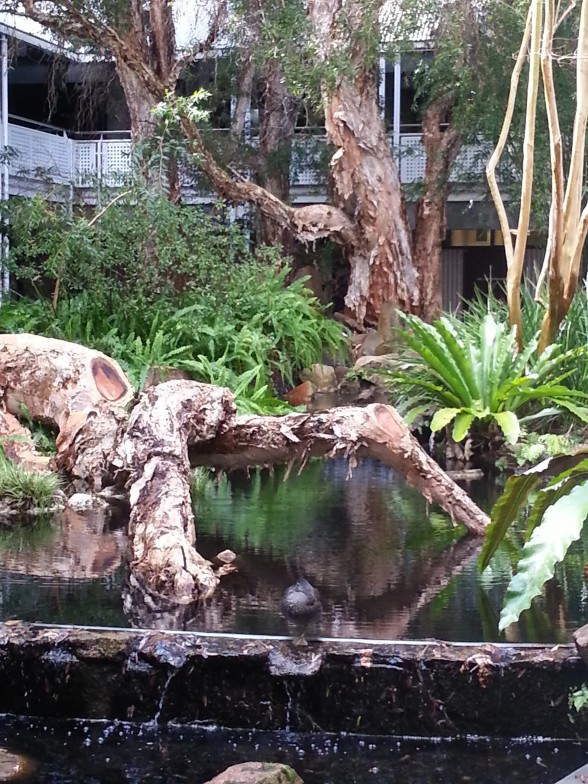 I look back on the person I was a year ago and I can scarcely imagine the way I thought and the things I wanted. I’ve done a lot of growing since I met Naomi and I’m seeing it in so many areas of my life. I recognise fear when it comes to me, and I challenge myself to move through it. I genuinely care about others, not just out of being polite but because I value their experiences. More often I listen when people speak, rather than wait for my turn to say something. And perhaps greatest of all, I recognise that there is a whole world outside my head. This revelation was particularly strong when one day, after brooding on everything that was stressing me out, I looked up and saw a duck standing on one leg perched on the edge of a small waterfall. I wondered how long it had been there, and marveled at how peaceful it was irrespective of the whirlwind of stress going on inside me.

Yet times are not always rosy. I’ve worked hard to get where I am today. I’ve confronted a lot of the unhelpful beliefs which kept me back, and I’ve broken myself down and rebuilt myself in subtle (and not so subtle) ways these past twelve months. I also realise that I’ve got a lot more confronting and breaking down to go, but I’ll get there when I get there. I just wanted to share a quick journal entry from a few days ago, which I think does well to capture my growth towards looking after my mental health.

“8th October, 2013. Today my anxiety walks with me. But, gently, I walk alongside it until it’s ready to walk on its own.

It doesn’t feel like it sometimes, but struggle is a sign of change. And I am so grateful for the opportunity to learn how to be happy and get on with my life, even on days such as these.

The most important thing is to stop caring so much about how I feel, and to care more about the world outside my head (particularly other people, who deserve my full love and attention).

Life is good in the end.” 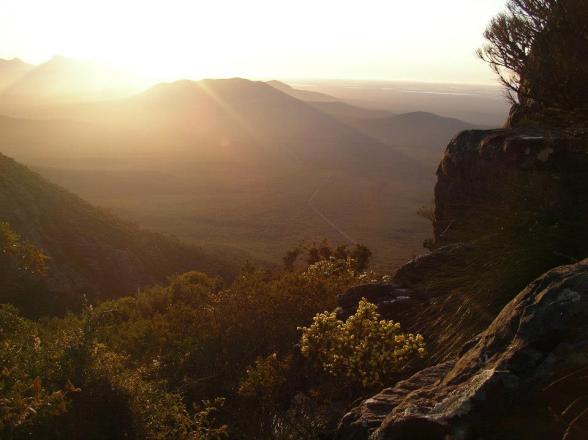 Gashuku this year was different to that of the previous years. Or rather, I’m told it was more-or-less the same, but I was somewhat different. Every morning started with taiga (a combination of taiji and yoga) and a morning run, kihon (basics practice like 500 kicks or repetitions of kata) and then a sprint back to camp. We took cold showers, made breakfast and earl grey tea (accompanying a discussion about budo – the way of the warrior), and then relaxed until mid-morning training. We practiced kata, bunkai, embu and tuide (patterns, applications, looping sparring drills and joint-locking drills) until lunch. After a break for digestion we continued with afternoon training, featuring weapons (stick, knife and jo (short staff)) and further kata practice or tensho/uke tanren (hand sensitivity/conditioning drills). Before the sun set, we would practice either yoga or taiga, and then maybe bust out a bit of conditioning (pull-ups on branches or Okinawan push-ups) before finishing training with mokuso (meditation). Showers and dinner to end the day, with a little down-time before lights out.

This pattern more-or-less continued throughout the week, breaking only for a rather sudden trip to the mountains (I had foolishly assumed it would happen at the end of gashuku like last year). We climbed Mount Toolbrenup and reached the summit in just under an hour and a half. Sempai Dave was going so hard that we were literally steaming when we got there, sweat dripping off us (or in the case of Big Dave, drenching his shirt – he wrung out perhaps over a litre of sweat). As the sun set, it got harder and harder to push through the scrub and we eventually made camp in the first space that had enough room for all of us to lie down. We got into our crinkling survival bags (I made the mistake of reusing mine from last year and it soon tore) and spent the night on the rocky ground. I got up at around 2:30am to sit by the fire with Sempai Dave and a few of the others, and together we gathered firewood, ate our rations, drank tea and shared stories. The night was cold but not bitter, and we passed the hours til dawn almost comfortably.

I did however injure my knee quite badly at some point during the climb, and the descent was… well, difficult. I felt so guilty for holding everyone up as I limped down the mountain, every second step somewhere between a dull ache and a stabbing, cry-out-loud pain. It took us about an hour longer than expected to reach the carpark, and when we hit level, paved ground, I was so relieved I very nearly hugged the road. It was a bit hard to train after that- I couldn’t really bend my left leg (though Rob’s physiotherapeutic strapping worked wonders to relieve the pain) and I was amazed at how much it slowed me down during training. Evasions which I had taken for granted became a limping, awkward affair; kicks were lower, running excruciating. I managed to drive most of the way home, though it still hurts to press the clutch.

Overall, I had a tremendous time. I faced my fears with (mostly) courage. I practiced mindfulness frequently. I learned new forms, improved my technique, strengthened my body and deepened friendships. Yet I didn’t learn quite as much as I have the past three gashuku– I was already quite familiar with almost all the kata and their corresponding drills, so I didn’t need to spend every free moment desperately scribbling down new sequences in my journal. Because I didn’t learn so much new material, this gashuku was more about refining technique and growing the spirit. And to be honest, it scared me a little to focus so much on spirit training. I felt that at times I didn’t push myself as hard as I necessarily could have, and at other times perhaps I pushed myself harder than was wise. But that’s my continuing challenge: to grow into my role as a senior student, which is not just about technique and knowledge, but an attitude to life and courage in the face of hardship.

Finally, the return to Perth has been a bit strange. One of the first things I realised was that I was overwhelmed with “things I wanted to do”. In the mountains during the breaks, I could do one only a handful of things: read, write, train or rest. Back in the world I’m suddenly spoiled for choice: do I play Mass Effect or read City of Glass? Do I spend time with Beth or go outside and do taiji? Do I write this blog or respond to 36 emails which have arrived in the past week? Suddenly I’m overwhelmed with an unnecessary complexity in a life that is so simple. In the mountains if there was a problem, you either did something about it or you didn’t. Here, I feel the old temptations to procrastinate to avoid doing things that eventually need to be done, like the dishwasher or study. I can’t quite figure out how or why, but there seems to be both too much to do, and nothing of importance worth doing. I suppose my best shot is to do things that bring happiness to myself and others, and that make a difference in the lives of those I am fortunate enough to meet.

I’d like to end this blog with a comic, illustrated by Gavin (who is the brother of the brilliant mind behind Circus Conditioning), which perfectly encaptures how I’m feeling after returning from the mountains. 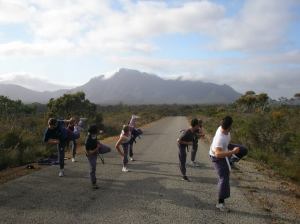 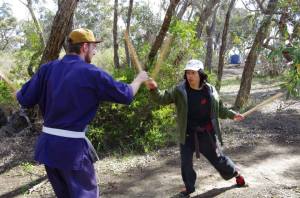 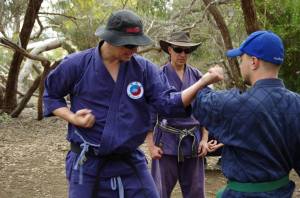 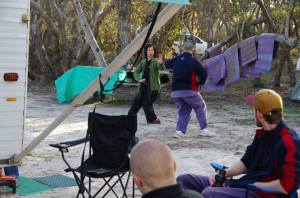 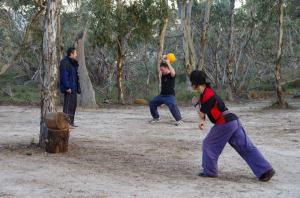 Knife throwing during a break. Two in a row! 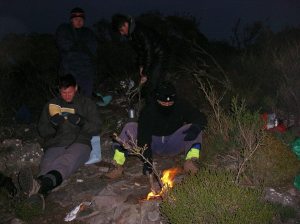 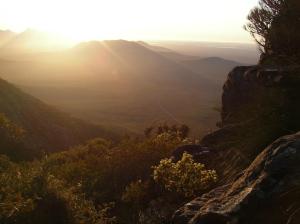 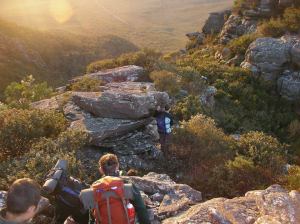 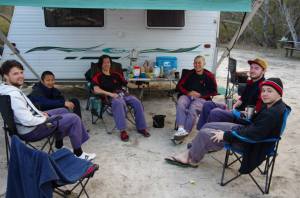